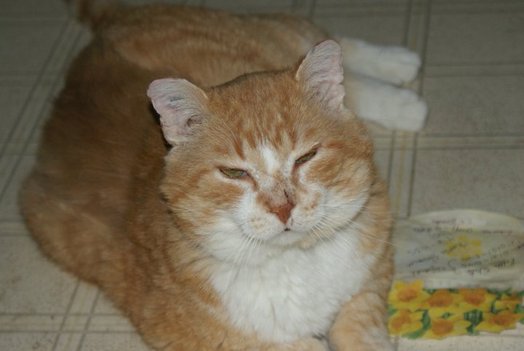 Oscar Wild, FIV+, adopted, and living the life of Riley.
Craig Street Cats does not routinely test for FIV or FeLV.

FeLV (feline leukemia virus) is a terrible disease that kills many cats.  FIV (Feline Immunodeficiency Virus) does not cause sickness itself, but can weaken a cat’s immune system, allowing minor illnesses to become very serious.  It is important that cats not be allowed to perform the behaviours that spread either FIV or FeLV.  Since fighting and breeding are the most common forms of transmission for both viruses, spaying and neutering are the most effective means of preventing the spread of these diseases. Rates of infection for both feral / stray and pet cats are about the same:  3% to 4%.   Neither Alley Cat Allies nor Neighborhood Cats, the major feral cat advocacy groups, support testing of feral cats for FIV
or FeLV because testing is prohibitively expensive, and not terribly accurate.


FIV is similar to HIV, in that it is spread through exchange of fluids.  Cats typically spread it through bite wounds inflicted during mating or fighting over mating or territory.  Sterilized cats don’t fight very often, so they are at low risk of either getting or spreading the disease.

FeLV is more contagious, being spread through saliva (bite wounds, grooming, etc.), nursing, and shared litter boxes.  That said, most healthy cats that come in contact with the virus do not become ill from it.  Many that do become ill, recover and go on to live long healthy lives.  In “at risk” populations (poor general health, poor nutrition, poor sanitation, etc.), the disease may kill the entire population.  Kittens are the most vulnerable to this disease, as their immune systems are not fully developed.

There is a kit available to test for both viruses at the same time.  It is expensive, and the test must be repeated several times, over a period of several months, in order to identify a probable infection.  Once a probable infection is identified, a further, more expensive test is required in order to determine whether the cat is truly infected.  Most vet clinics and shelters do not follow that protocol.  Tests are administered once, and the cat is identified as positive or negative based on the results of the one test.  Many healthy cats and kittens are killed because they test positive for FIV or FeLV on one test.    Others are labelled as “positive” and ’unadoptable’ when they are actually healthy and very adoptable.   Additionally, many cats carrying FIV or FeLV are identified as negative because they test negative on one test .  Neither of these results is acceptable.

Because of the way the SNAP combo test is designed, it shows many more false positives than true positives.  If 1,000 cats are given the test, 108 will show 'positive' results.  Statistically, only 30 of those cats will actually have either FIV or FeLV.  This means that 78 perfectly healthy cats may be killed because of an inaccurate test result.

At Craig Street Cats we do not test kittens under 6 months of age, because they carry their mother’s antibodies, and may, or may not actually have the disease.  We DO test cats under the following circumstances:

Mature tom cats that have been living on the streets are tested as they are the most likely to be infected with either virus.

In addition, all cats and kittens coming into Craig Street Cats are kept isolated for at least 2 weeks in order to identify any health concerns.
During this time kittens are seen by a vet, and any health concerns addressed.  Any adult cat showing signs of illness is also seen by a vet
before being allowed into the general population.